…but before I begin with my life, OMG, have you seen this?

Webs is selling kits for Franklin Habit’s Dolores – complete with sunglasses! – and an additional kit to make Dolores’ Rhinebeck Sweater! Am I going to buy one or both? Not today.  Too much month left at the end of the money, but I’m saving up for both if I can. Are they not the cutest? What an adorable toy she would make.  Dolores is a wild woman, but I believe our Patty and she would soon be fast friends and partners in crime! (God help us.)

Isn’t it funny the kind of thing that wakes me up from blog fading? It has been a crazy almost-6-months – see chronology below:

*   June 11: The day after my last post, my knee went out after court that morning.  I could barely walk to the parking garage, get in my car and get home. Taking the next ten days off work helped me heal a bit, but after an appointment with an orthopedic surgeon and an MRI, I soon learned that surgery is in my future. It was at first scheduled for today, but something (too-high blood pressure) got in the way, so we are holding off until late September, to better plan the thing.

*    June 24: Two weeks after I last posted, our (my sibs and my) Dad died. Suddenly.  He hadn’t been in great shape to begin with, but this was a bit unexpected, an accident, really. Dad and our stepmother were both very active in their trade union.   Dad was a fairly staunch agnostic if one can use the word “staunch” and “agnostic” in the same phrase.  He felt that religion was the cause of the world’s ills.  I felt that it might have also lessened a lot of the world’s ills.  I suppose the jury is still out on that one.

Anyway, we will all likely get together at some point to honor his memory, but there was no traditional funeral or even a burial, as he was cremated – which left us all to deal with the loss in our own way.  Of course, the one most devastated by this was our stepmother who cared for him as his health declined over the years.  Parkinsonian Syndrome was progressing into Parkinson’s, leaving bits of his memory and much of his physical ability behind.  She told me once that she had decided to make their home into a sort of nursing home for him, which she did, digging into their remaining savings to provide for health aides for him and a home that was comfortable for him.  She made a conscious choice to enjoy the brief moments of lucidity when he was truly himself – and that helped her get through the tougher moments. They were a close couple who loved – and argued – passionately. I know he has left a big hole in her life and I hope their shared memories will be a great source of solace for her.

I also believe that our youngest three sisters who had the least amount of time with him, have been deeply hurt by his passing.  He never met his youngest two granddaughters, which is beyond horrible.

Dad died on a Sunday.  A fan of his, New York dentist Allan Sniffen, if I am not mistaken, is the person who had started a non-profit website years ago called Rewound Radio, dedicated to rock and roll radio.  The weekend after Dad’s death, Mr. Sniffen put together 48-plus hours of Dad’s shows from 1961 through 2003, encompassing his time at WABC-AM from 1961-1983 and WCBS-FM through 2003.

Rewound Radio has done other such tributes to various radio stations, disc jockeys, and radio shows.  I remember one time, in particular, a few years ago: my father’s 20th-anniversary show from 1981 was being aired online.  His mom – my grandmother – phoned in because she had learned that sending a telegram would take too long. She came from the generation in which, if you couldn’t attend an event, you sent a telegram, offering best wishes.  At the end of the show, Dad played a recording of my grandfather, singing “By a Waterfall.”  At the same time, our kids and grandkids were over for  Sunday dinner.  I pointed up at the machine amplifying the online show and said, “Kids, that’s your great-grandfather, that’s your great-great-grandmother, that’s your great-great-grandfather singing.”

A surreal moment for me, a late baby-boomer who thought fax machines were nothing short of magic, but for them, my post-internet space-age darlings, it was nothing new.

That show was included in the tribute that took place the weekend after Dad’s death. John, the DH, set up his iPad to play it nonstop in our kitchen – the place where we always had the radio playing at home.  Like everyone else who enjoyed AM radio at that time (and of course I was one of them), I laughed at the jokes, enjoyed the music and (in my case at least) cried at the loss. So that was my personal funeral for Dad, attended by thousands, and yet just one.

Music has been always the background and foreground of my life.  The very first home I lived in was my grandparents’ house in Malverne, NY.  Grandfather was a musician. At one time he had headlined his own big band, traveled around, made records.  He played with the likes of Benny Goodman and Tommy Dorsey. He worked gigs, taught in schools, and taught me how to play the flute. Flute was his first instrument, tenor sax, his second. He practiced both while I took naps. My grandmother was a cellist and the best, sweetest Grandma anyone could ever have, my dad was a jazz lover, my mother trained as a singer. Throughout my childhood, adolescence and young adulthood, the radio was on all day and the stereo at night. So, a musical tribute had a great deal of meaning for me, to say the least.

People often asked me what it was like growing up with a father you heard on the radio and also on TV doing commercials. I thought it a strange question because I had never grown up without one who did that.  Although I do recall when John and I were still just dating, he would jokingly put a band-aid across the radio band in his car when my father was on the air.:)

Another question people would ask a lot: “Is he as funny at home as he is on the radio?” Ahh, that was complicated.  As we got older the answer was more and more “yes” – and actually more so, because he could say at home what you didn’t dare say on the radio. When we were younger, however, he was still in the midst of parenting tasks, which were often decidedly NOT funny:).

I will miss him until I die.  I hope he was pleasantly surprised by the wonders of Heaven:)

*    July 19-20: Last week, John, the kids (except Dan who is still in NYC), grandkids, and I went to Hershey, PA for a family reunion with John’s side of the family.  Every last one of us had a terrific time, though I fear John went through a bit of suffering pushing me in a wheelchair uphill from time to time. Onlookers were a little confused when at one point I stood up from the wheelchair, saying “It’s a miracle” and went on a ride.

*     August 22-25: I attended a professional conference in San Antonio, TX.  In the past, this has not entailed a great amount of walking, thank goodnesss:)! I did a wee bit of walking and got to know a co-worker and admire her all over again.

*     September 22: Our youngest wed her fiancee, Liz, in Ohio and I was privileged to be presiding over their ceremony. That same day, her cousin was wed to his wife in a much more conservative Catholic ceremony in New York.  We love them both and pray for a good life together for all of them:)!

on the knitting front…..

I have been working all summer on a Marie Wallin pattern called Daffodil. 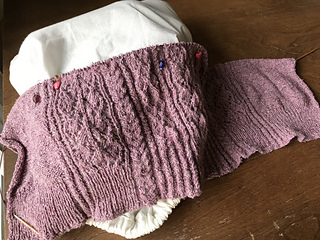 In October, I was at the Columbia Sip ‘N Knit’s retreat at the Clagett Center in Adamstown, MD.  I purchased a sweater’s amount of Shepherd’s Wool at the Knot House in Frederick, MD with my co-conspirator, Anika.  I decided to use the wool to knit Treelight by Jennifer Steingass –  from Making Magazine No. 6 Black and White. I will use the colors the creator suggests in Shepherd’s Wool – 6 skeins from the Knot House and 2 skeins from Cloverhill Yarns in Catonsville.

Friends, I wish you well.

God be with you ’til we meet again.