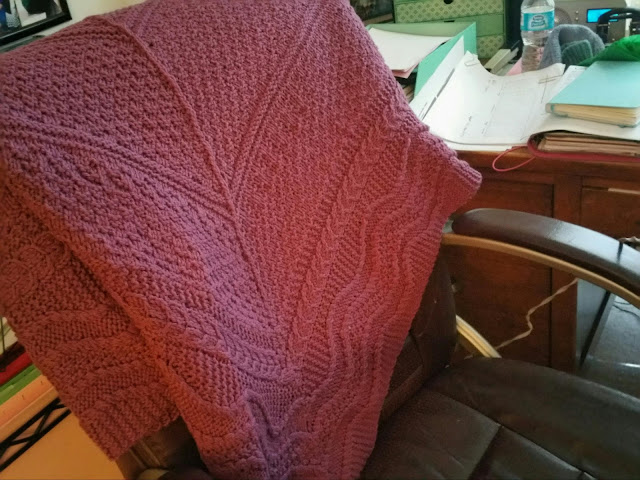 As far as the knitting goes, that is;)! That Ashby shawl continued to come in handy last week as we dealt with record snowfalls.  Have made a wee bit of progress on the Dryad for John, and, because we had a bunch of snow days off from work around here, decided to cast on two more projects and will likely cast on a third.  We’ll see…. Decided to finally use that Zooey on another shawl.  Yep, and a Brooklyn Tweed one as well:): Stonecrop by Jared Flood. I am doing the smaller version of the wrap. It’s actually quite an interesting pattern.  Sadly, no pictures yet.  Will post one or two as soon as I can.

Having seen my progress on the Dryad, and wishing to preserve it for John, S (the one who appropriated the Guernsey Wrap for herself after “borrowing” it from her father) talked me into knitting her the Elfreide scarf (another Brooklyn Tweed pattern by Lucy Sweetland I’ve been wanting to knit for ages). Oh dear. I had the yarn. I just had to cast on.  No pictures yet of this, either, but there will be.

So there it is. Not much to talk about on the knitting front – at least not much to photograph.

However, in other news….

I spent pretty much all of January alternating between  recovering from an upper respiratory infection  – that kept on visiting me since September –  and work.  I missed a LOT of choir rehearsals and I think I only went to one bell practice, due to the above and snow. However, this week things changed:). For four days straight I have been enjoying playing and singing with some of my favorite people.  On Friday, we had Mardi Gras practice.  My dear son helped me get the drums out of the basement and my fellow musicians of the “Lassez les bon temps roulez” group helped me get them to St. Pete’s.  Then two hours of wonderful practice and home.  Saturday: Diane L from choir gave me a lift to Barry E’s home for an extra rehearsal of the Durante (not the Jimmy variety, though plenty of jokes have happened) Magnificat and a wee bit of Bach.  We had a pot luck lunch for which I ended up taking more food home than having contributed.  No worries – with my crew, we will make short work of it:)!

The best news in choir is a budding romance between two truly good people, both of whom have experienced terrible losses in their =lives.  It does my heart good to see love win out.  As I said to a good high school friend a few years back – everybody loves a lover:). And not for nothing, but another lovely friend has found love as well.  She had spent decades in a loveless marriage full of verbal cruelty and now she is hearing and experience sweetness and love.  That makes me so happy!

The fourth day was today  – the early service at St. J’s, followed by another rehearsal of the Durante Magnificat:) and the unselfish talents of our dear Nancy and the (ever so kind) Barry.

As the beloved Ina Garten says, “How bad can that be?”:)

God be with you ’til we meet again+